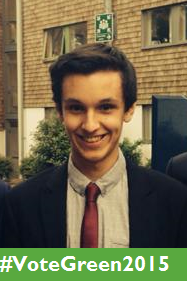 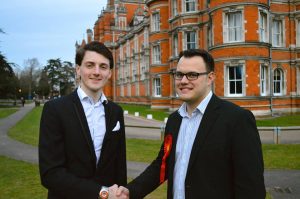 Voter turnout in the UK has been on the decline for years, and young people in particular have gained a bad reputation for not engaging with or even caring about politics. Here at RHUL some students simply don’t fit the stereotype. You may or may not be aware that we have a selection of students standing as candidates in the local elections, and societies that passionately care about politics. We caught up with a few to get their views on the main talking points for the upcoming election.

-What is your stance on tuition fees?

Our party is committed to reducing tuition fees to 6000. We know other parties tend to promise lots and never deliver, so our aim is to under promise and over deliver. What’s also crucial is ensuring that we improve funding for middle income families who get squeezed out by the current loans system and ensure there is better provision for those attending uni in the more expense South!

-Does your party believe that international students should have the right to work in the UK past graduation?

Other parties come down far too hard on international students and damage the rep of the UK. We believe they should be able to stay for two years after graduation, they’re a valuable asset to our country, paying more than UK students into the system in terms of fees, they should be allowed the chance to be successful in the UK.

-Would your party continue with austerity measures to reduce the national budget deficit?

We need to balance the books in a reasonable time frame, again we don’t want to commit to dates and not then not deliver. Our party will take a rational approach, reissuing the 50p tax rate but ensuring we don’t raise VAT. We will reconsider expensive projects such as the NHS restructuring and HS2, to see where unnecessary costs can be cut.

-Where does your party stand on the privatisation of the NHS? How do you plan to improve front-line services?

We will scrap the health and social care act, and reverse the ‘privatisation’ that has occurred under the coalition government, which has created a post-code lottery in terms of quality of services; we need to see the trust system back in action that will encourage the integration of the health service which is the breaking point of success. The conservatives are spending too much on locums currently, we would hire more nurses and put the emphasis on front line care. We need to improve the GP system and would reduce GP paperwork to ensure every patient sees a doctor within 48 hours. The emphasis needs to be on service to society.

-What are your thoughts on increasing the minimum wage?

By 2020 we want an £8 minimum wage, we will enforce the scrapping of zero hour contracts, all public sector contractors must pay the living wage- the Labour party developed it and will deliver in long term.

-What are your thoughts on fracking? Where does your party stand in terms of reducing reliance on fossil fuel based energy sources?

We are committed to responsible fracking, though if oil process remain low, investment in fracking may be lacking anyway. We need to move to sustainable sources: nuclear, wind, part-solar, barrier projects such as the Thames barrier and Severn barrage, and these need to be delivered in public partnership. We’re also committed to freezing energy prices until 2017.

-Do you believe the UK should remain in EU? Would your party hold a referendum?

We would not hold a referendum. It would be pointless to lose the security that EU provides- we can’t deliver in terms of trade and investment if not a member. Our services and financial sectors are geared towards the union. Pragmatically we need to be in system to change in it.

We need to conduct a review, the global climate has changed and we need to ensure we’re not spending money unnecessarily. For the moment, we propose a reduction in Trident, but we are open to future discussion, we want an open party forum and encourage people to write to the party.

-What is your stance on immigration? Would you remove restrictions on foreign students entering the UK to study?

There should be no cap on immigration, we’re part of EU and therefore there should be freedom of movement- it is a right to every citizen and would damage relations of removed. 99% of immigrants are employed, and between 90-95% pay move into system than they take out. Citizens who come to the UK will only be able to claim benefits for 2 years, and employers won’t be able to undercut wages which is a problem for all in the EU.

-What local issues do you think are a priority?

Getting local people back into their homes after last year’s flooding, helping families. Protecting bus routes, there should be no cuts especially to early morning and late evening services. I’ll hold biannual meetings with local residents, to ensure I represent your views as best I can.

What is your stance on tuition fees?

Tuition fees cripple the ability for students and especially students from less affluent backgrounds to succeed later on in life. Therefore, I disagree with the Conservative Government that has raised tuition fees to £9000 and I agree with Ed Miliband in the view that tuition fees should be decreased to £6000. No person should be punished for wanting to have an education.

What are your thoughts on increasing the minimum wage?

I believe that minimum wage should be increased to a living wage to £8.00 an hour. Over the past five years, we as a country have experienced a cost of living crisis. To tackle this cost of living crisis we need to increase wages for low-skilled jobs. Furthermore in regards to jobs, I agree with the party and Ed Miliband that exploitive zero hours contracts should be banned as they create uncertainty in income.

Would your party continue with austerity measures to reduce the national budget deficit?

If the Labour Party is elected to government on May 7th the party would continue with austerity measures albeit with not as deep and as a hard-hitting on working class families. This is shown with the commitment of the party to deliver a budget surplus during the next parliament.

Do you believe the UK should remain in EU? Would your party hold a referendum?

I believe that the UK should remain in the EU. The European Union isn’t perfect however the European Union is the largest trading bloc in the world and provides the UK with jobs and greater GDP. The EU also gives the UK a greater voice in the world by being in the union with the backing of 27 other countries. In this view, the Labour Party would only hold a referendum if there was a change in powers between Brussels and London.

What local issues do you think are a priority?

In Englefield East, the local issues we need to tackle are creating a dialogue between the local government and Royal Holloway University. In this regard, issues such as providing jobs for students and encouraging the voices of students in local politics are priorities for me if I am elected. This will be done by working with the university and the student union in matters alongside the people of Englefield East.

What are your thoughts on fracking? Where does your party stand in terms of reducing reliance on fossil fuel based energy sources?

I think that fracking should not be adopted in Britain. Even though fracking would increase the GDP of the country this is outweighed by the disadvantages from Fracking. Fracking continues the unhealthy reliance on fossil fuels in the UK and instead the Government should focus on finding renewable alternatives to provide energy. In this regard, the Labour Party is committed to the reduction of the reliance of fossil fuels and the decarbonisation of our electricity supply by 2030. In doing this, the Labour Party plans to strengthen the power of the Green Investment Bank by granting the bank borrowing powers and to encourage the creation of one million high technology green jobs by 2025.

-What is your stance on tuition fees? How does your party plan to ensure that young adults from low income families get the support they need to enter higher education?

In terms of the Green Party policy on higher education, the main aim it to abolish tuition fees completely. We also stand to increase grants and bursaries to help cover livings costs so students from all backgrounds can enter higher education and have the opportunity to reach their full potential.

-Does your party believe that international students should have the right to work in the UK past graduation?

Our party stance on immigration in general is that it creates a diverse society that we can all benefit from socially and economically, so of course we would encourage international students to stay and work in the UK after graduation, and would place no kind of restrictions on this.

-The Greens aren’t known for their coherent economic policies, would your party continue with austerity measures to reduce the national budget deficit?

As a party we oppose austerity measures, that impact hard-working citizens, we instead encourage minimising deficit through higher taxes on the wealthy, ensuring we close down the tax loopholes which other parties aren’t as strict as they should be about.

-Where does your party stand on the privatisation of the NHS? How do you plan to improve front-line services?

We will keep NHS public and ensure we increase funding to front line services. We aim is to remove the focus on hitting targets, and concentrate on what matters: providing the highest standard of patient care. Another aim that I think is incredibly important is our aim to improve funding for mental health awareness campaigns.

-Where does your party stand specifically in terms of reducing reliance on fossil fuel based energy sources?

As a party we’re opposed to fracking, because of the adverse effects it causes to the local environment. We have a holistic view of renewable sources, we should not concentrate on one type of energy, but lots of different sources which all have potential future economic benefits.

We would disarm Trident due to its extreme cost, there is no serious security threat to Britain. Our policy is based on being able to defend ourselves proportional to the threat, so there would be further cuts across defence, based upon what’s necessary. It is worth thinking about that if Trident were to be scrapped it would pay for tuition fees for 30 years.

-How would you respond to the criticism that the Green party policies are artfully vague at best?

I would say before you make a judgement, look into policies themselves, they stand out amongst the other parties, to prove that we are committed to working towards a fairer, greener and more socially conscious society. If we have a Green party councillor- surely we could change people’s opinions?