So firstly, congratulations on your amazing achievement, you guys should be so proud!

Rebecca: Thank you! It’s definitely a great feeling to have completed the West Highland Way and to have done it for such a great cause. I’m already missing waking up to mountains and lochs covered in mist, but I have to admit that returning to showers and dry clothes has its benefits!

Could you explain exactly what you did and why you decided to do it?

Non: We hiked the West Highland Way, which is Scotland’s most popular long-distance route, that runs from Glasgow to Fort William. We wanted to do it because it’s a really big physical challenge and we wanted to push ourselves this summer. It also gives you some of the most stunning views of Scotland, like Loch Lomond and Ben Nevis, which we really wanted to see but couldn’t really afford to any other way. We realised that hiking 95 miles, wild camping, and carrying your kit on your was a pretty impressive feat and one that people would probably donate to charity for, so we decided to do it for Survivors UK.

Rebecca: The trail runs from Milngavie (just outside of Glasgow) to Fort William – a 151km stretch of mountainous hiking that can take between 4 days (goals!) and 10 days – we managed it in 8. Scotland has a great law that means you’re free to wild camp anywhere in the country which is what we did for 6 nights, sadly (or not so sadly) on the East side of Loch Lomond. Conservation efforts mean that you have to stay in a camp site on that part of the trail, meaning we had one night with very welcome showers and toilets. We both really enjoy hiking and wanted a challenge for the Summer – something that makes you feel like it the holidays weren’t wasted (debatable) watching Netflix and sleeping most of the day away. The West Highland Way was Non’s idea, I have to admit I’d never even heard of the trail, but once I looked into I was convinced it would be an epic week of hiking that would make some great memories. 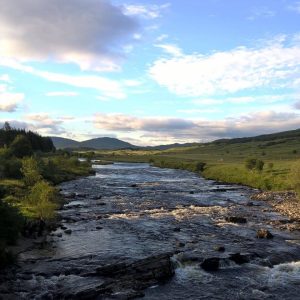 Tell us a bit about the charity you chose.

Rebecca: We chose to walk for Survivors UK which is a charity that provides counselling and support for male victims of rape and sexual abuse, and their families, either in person or remotely via email or text.

Non: Survivors UK is the largest charity in the UK to support male victims of rape and sexual assault. They had all their government funding scrapped last year, at a time where the number of men seeking support after suffering sexual abuse has increased by over 100% in the past few years (because of historic sex abuse cases like the Jimmy Saville case). They provide counselling and emotional support to really vulnerable men which is a really important cause.

What inspired you to choose Survivors UK?

Non: Because of their lack of funding. They provide absolutely crucial support for so many men but their funding cuts mean they wont be able to without support from the public.

Rebecca: We heard that Survivors UK had its funding from the government scrapped last year, leaving the charity completely reliant on donations from the public. In February of this year, some funding was reintroduced from the office of the Mayor of London, but the interlude still tells of how certain institutions do not prioritise the mental health of male survivors of sexual abuse, and this in turn leaves a mark on the public who are not as aware of this charity and its plight as they are about other causes. In short, the stigma around male victims coming forward needs to be erased in order for them to be able to reach out for help, and I believe that supporting great charities such as Survivors UK will catalyse making this a reality.

Obviously hiking with no electricals, in a foreign area is bound to come with its difficulties, what did you find the hardest thing about your experience?

Non: The heatwave! Walking in a heatwave, which is what we had to do for two days, was exhausting and a little scary because we weren’t sure how badly the heat would effect us. There were also bits where the path was eroded and we were climbing over rocks and huge tree routes to keep going. That was very difficult with our packs. And obviously the Devil’s Staircase wasn’t very nice (a really long steep path up to the highest point of the Way).

Rebecca: It was pretty daunting to be venturing into the wilderness of Scotland, our only supplies being what we could fit in our rucksacks (which seemed to be quite a bit, going by their weight) and having no contact with family or friends for 8 days. However, once we embarked on the trail, the friendliness of local people and the solidarity we shared with fellow hikers quickly made us feel that we had all the support we needed. Luckily for us the Way is also a very well-marked trail, so it would have pretty impressive if we’d managed to get lost!

And what was the highlight of the trip?

Non: The views which were absolutely stunning. I felt like I was in Lord Of The Rings most of the time because the lochs, mountains, tiny villages, and lonely house looked so magical. And meeting so many people, there were so many other walkers from all over the world and it was great to hear about how they were enjoying the hike and where they’d come from.

Rebecca: Meeting so many great people! It was amazing to meet hikers from all over the world – from Scots who’d walked the trail 50 times, to Swedes and Austrians – the trail was more of a mecca for international hikers than either of us had anticipated. We began to recognise groups that we’d seen on previous days and would swap midge horror stories and blister comparisons – all with grins on our faces because even 100 midge bites (probably a conservative estimate) couldn’t blind us to the spectacular views of Loch Lomond, the Glencoe mountain range and, finally, Ben Nevis.

What three words would you say best describe the experience?

Is there anything you wish you knew or had prepared for in advance? 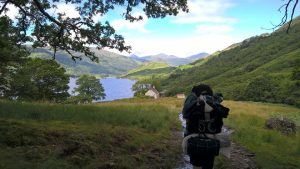 Non: That we wouldn’t need to bring as much food, or as much fuel. Extra weight in your bag is no fun.

Rebecca: Honestly I don’t think so, we planned and packed pretty well for the trip, and anything that was unexpected was generally a good surprise – although nothing can prepare you for the swarms of midges you find when camping at the foot of the Devil’s Staircase!

Would you do it again?

Non: Ummmm! I would walk the West Highland Way again, but without the back packs. There are definitely bits I want to visit again and again and the walk itself was fantastic, but I’d do it in small parts so I didn’t have to carry as much. I’m going to do other hikes with wild camping and carrying a heavy pack, but not the West Highland Way again like that, maybe the Alps next year!?

Following such an impressive achievement for a great cause, it’ll be interesting so see what the two get up to next. You can donate to their Just Giving page here.