Having never seen a Shakespeare Society production before, I was unsure of what to expect of Director Bethany Wilkinson’s adaptation of the infamous tragedy, King Lear. King Lear is one of my favourite plays in the world and, being quite a traditionalist with regards to Shakespeare plays, I hoped that the play would do it justice. In some ways, it definitely did. In others, it did not.

Before the play officially starts, as audience members file in, the play has clearly already started, introducing us to Lear from the beginning. Jack Davies as King Lear, epitomises the idea of a ‘mad King’ by trailing around the hall, mumbling nonsense and cackling maniacally. He moves into audience members’ personal space, balling up paper and throwing it at key targets – me included. He is mad, obviously. 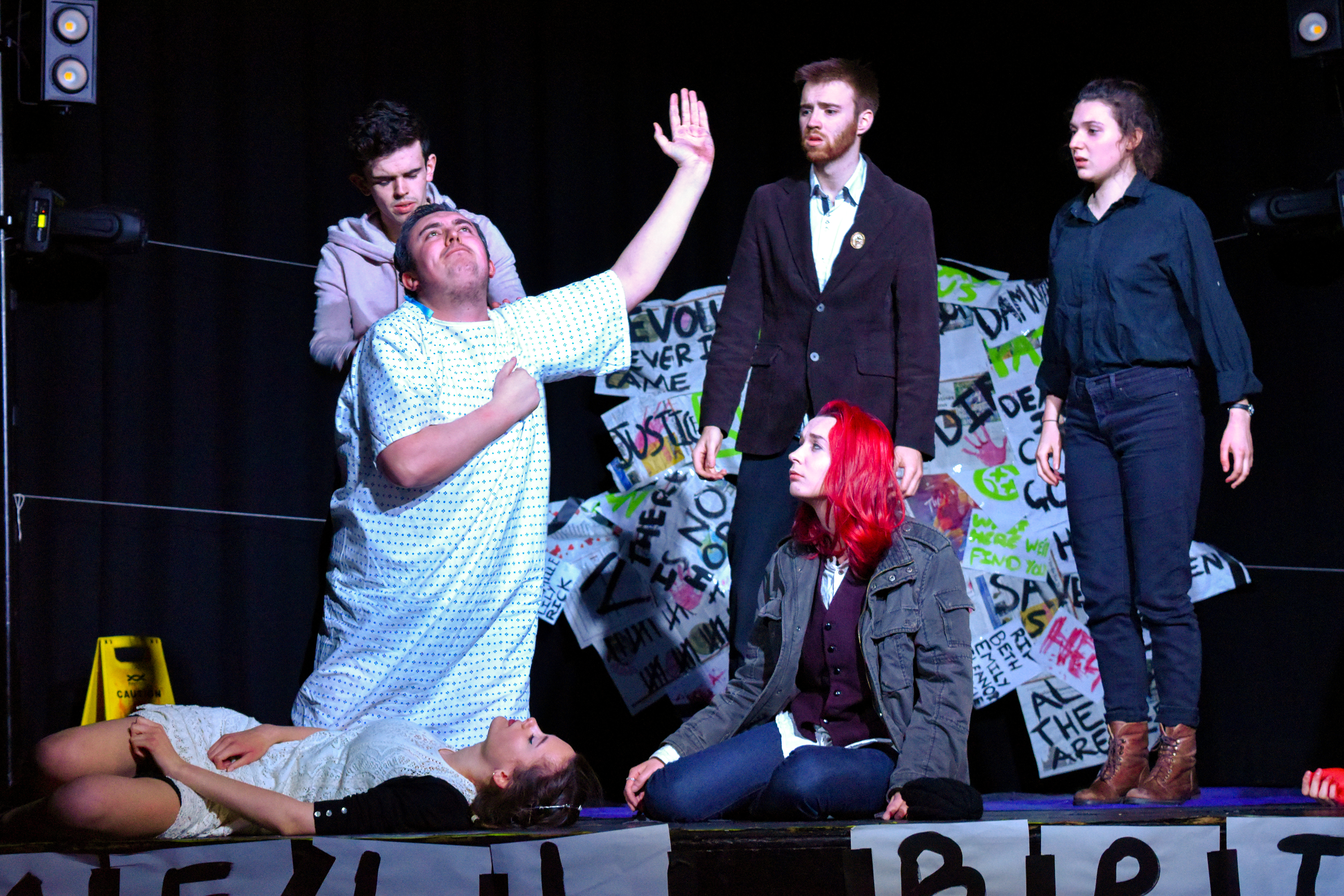 One key component of the play, as it is usually portrayed, is Lear’s descent into madness, with ‘descent’ being a key word. This adaptation, while somewhat sticking to it through the use of Shakespeare’s original language, largely does away with this descent, as Lear is mad from the beginning. This is simply a directorial decision, but I believe that a descent into madness is a fundamental theme of the play – Lear must begin as a powerful King who is then stripped of his power, family and mental faculties. But that’s merely a personal choice on my part and a criticism that may not be found in others.

An interesting idea, that could have been highlighted more, was the question of whether the events of the play actually occurred or whether they were merely confined to Lear’s addled mind. In order to create this division, the crew used soundbites of a heart-rate monitor as well as strained breathing to add to this effect. As the play started out, the soundbites were an interesting addition, providing a different interpretation of the play. However, as it went on, they seemed to lack a focus and appeared to play randomly in the middle of a line or specific action. It is unclear whether this was a technical issue or a directorial decision – the tech in the SU is often at odds with what directors and performance crews wish to do, and it may just have been the best of a bad situation with regards to tech.

Conceptually, the play lacked clarity. It was difficult to ascertain the elements of this adaptation, without having been told beforehand. It is lucky that the programme describes the concept as that of a “dystopian wasteland” and that it was mentioned to me that Lear has escaped from a mental asylum, as much of this seems to have been lost in the staging. Despite this, there were some outstanding performances by the cast themselves, who have the difficulty of portraying characters from one of Shakespeare’s most complex and difficult plays.

Elle Fraser, playing the evil and delightfully manipulative Reagan, stuns in a bright red dress, a fur coat and fishnet stockings. Costume designer Lily Grainger manages to portray Reagan’s key personality traits through her outward appearance, which both informs and shocks the audience. Fraser said that she has “enjoyed playing this manipulative character” and, to her credit, she definitely plays it well. The other evil sister, Goneril, played by Lizzie Corscaden, works well onstage with Fraser and their differences through individual actions as well as costume. However, their similarities and the strong chemistry between them as ‘sisters’ is very intriguing to see. Beanie Aurora White successfully establishes Coredelia’s innocence and the stark contrast between her and her sisters early on through a quiet and soft-spoken manner that is then brought forward to be louder and stronger as the play moves forward.

Josip Martincic and William Lawson, playing Albany and Cornwall respectively, work together on stage to balance a man unsure of his morality with a man so evil he drinks the blood of his victim, Gloucester. Their performances put a smile on my face despite the darkness they are emblematic of.

Tom Holmes, who is instrumental as Edmund in the sub-plot involving Gloucester and Edgar, is a wonderful actor. Having previously seen him excel as the Emcee in Cabaret, with flamboyance and sex appeal, it is starkly different to see him in the role of the malevolent and somewhat deformed Edmund, but it is nevertheless an amazing portrayal. He has found this role “challenging” as it is so different to “play someone which is not similar to [his] natural disposition” in life, but overall very enjoyable and entertaining to explore those themes in his character. 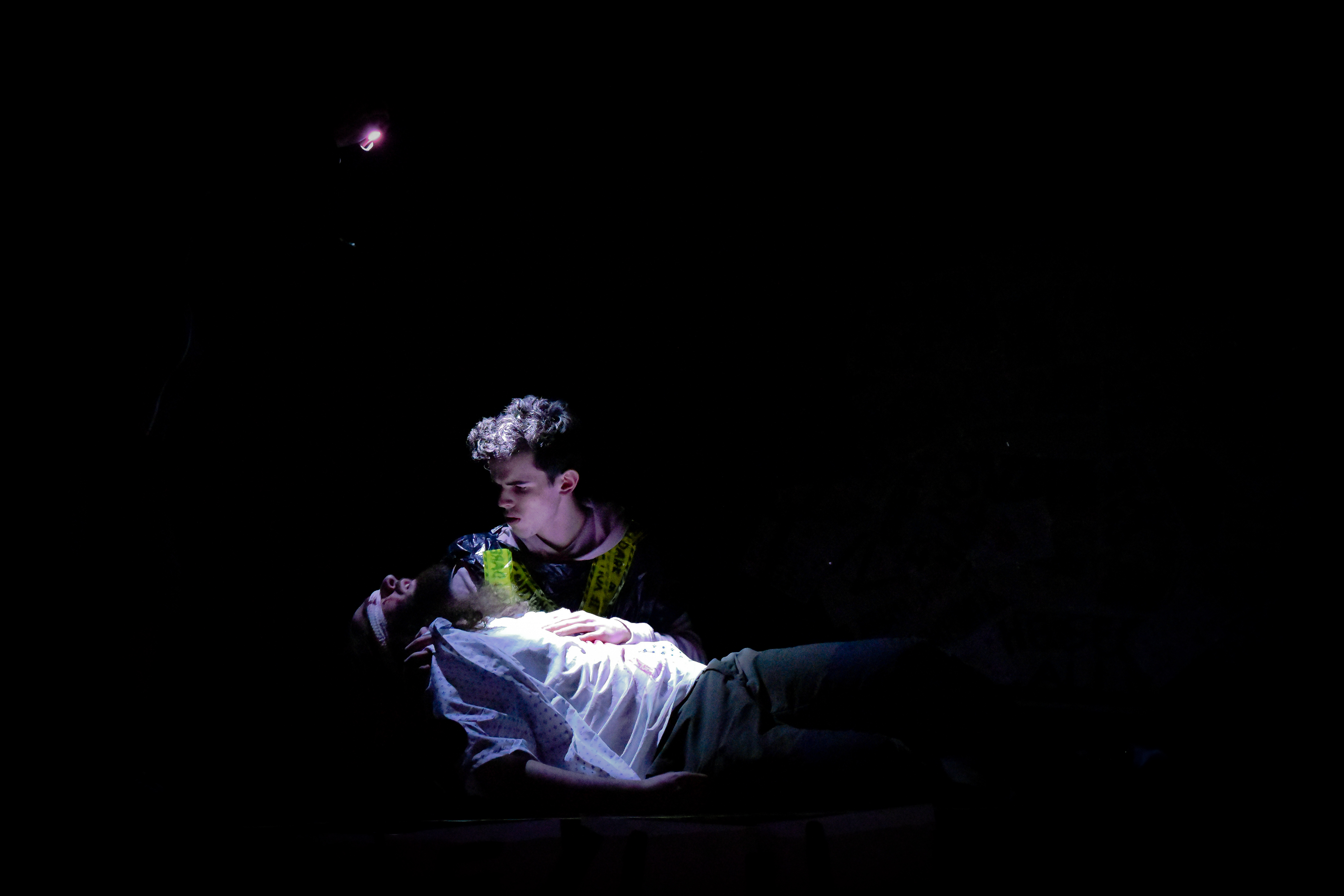 Special mention must go to Jack Read as the Earl of Gloucester, Abi Smith as Kent and Callum Pardoe as The Fool, all of whom take difficult characters and manage to bring them to life through a variety of accents, dramatic actions and comedic ideas. Well done to Rob Wilson as Oswald, Will Maxwell as Edgar as well as Sorrel Wilson, Bethany F. Knowles and Matthew Bird, who played multiple roles throughout the play.

Aside from some corpsing that could have been avoided, the entire cast were definitely wonderful and should be commended on tackling this extremely difficult play. It was, on the whole, a very enjoyable, albeit long, way to spend a Sunday evening.