With the New Year fast approaching, Holloway’s sports clubs will be hanging up their kit and finding their voices as part of the RHUL Sport Choir, an innovative new project led by musical director, Amy John. The choir comprises a handful of sportsmen and women with little or no singing experience except their sideline chanting, to raise money for this year’s BUCS charity; Marie Curie Cancer Care. “It aims to get people out of their comfort zone” the former Women’s Football President explains. “We’re doing something completely different to raise money for charity”. The Sport Choir is already set for an exciting few months with preparations in place for a launch night, and the planned release and sale of a single after a Colour’s Ball performance in March, with all proceeds going to Marie Curie.

The project is a great idea to get club members involved in something they wouldn’t usually try, and was inspired by Gareth Malone’s celebrity choir for Children in Need. Amy tells me of the incredible interest clubs have shown, with the majority having members involved, “It’s better than I could have ever hoped. There’s a level of competitiveness between clubs at Holloway, and this project will be an amazing chance to bring everyone together and work collectively!”

I also ask Amy of the work behind the scenes, as surely something of this scale can’t be down to just one person! “There is a huge team who are helping to make this work” she tells me. “Cissy Radford, current President of Women’s Football, and Kate Burns, current member and head of content at Rhubarb TV, have been part of the initial meetings and planning, with many more of Women’s Football involved with promotions, event management and organisation. A particular thanks goes to Fleur Noble-Johnston who is assistant musical director and an integral part of the process”.

Despite this choir being the first of its kind at Holloway, it’s hoped to become an annual occurrence, aiming to raise as much as possible for an unbelievable charity. “I really hope everyone involved finds the experience uplifting and life changing” Amy says to me. “Music has an incredible ability to bring out emotion and I think many people throughout this process will learn an awful lot about others and themselves”. Amy’s passion for music is inspirational to say the least, giving the impression that the RHUL Sport Choir will be a great success and leave an unquestionable legacy. 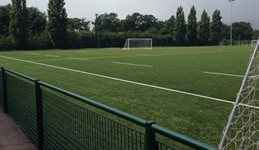 Nobles took quite a transformation over the summer. The former sports field, consisting of football and rugby pitches, is now unrecognisable. In their stead stands a sand based hockey pitch, tennis and netball courts; in addition there is a multi-use games area and the 3G pitch. Only returning students can fully appreciate the new facilities […]

If you had told me when I began my Master’s degree at Royal Holloway in September that I would take part in a dance competition as a member of a hip hop team, I would have laughed. A lot. Nevertheless on the 29th November I found myself on the SU stage facing a rowdy crowd […]